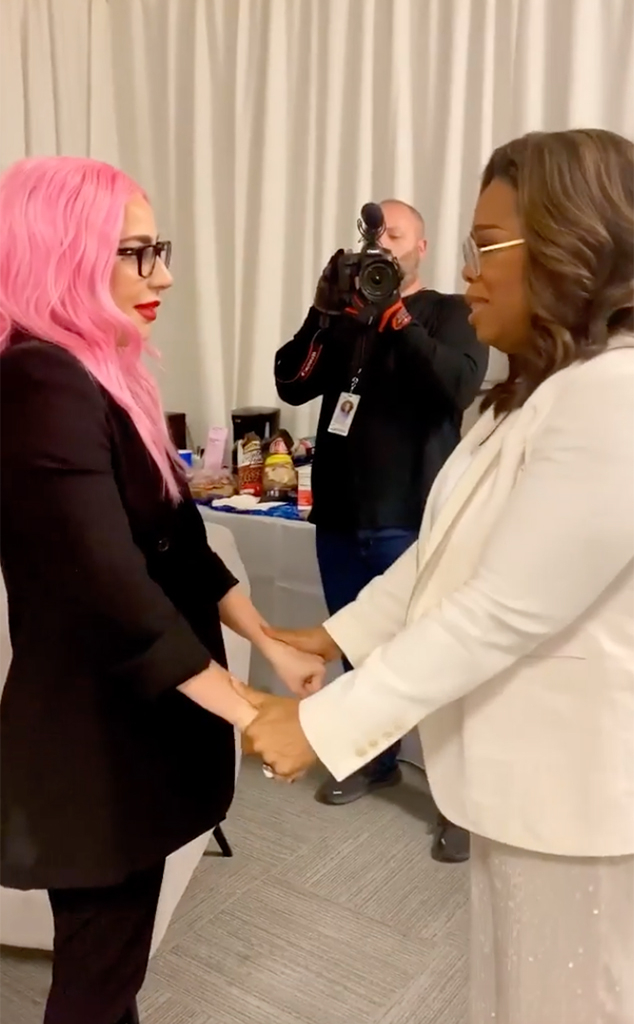 What does it take to make Oprah Winfrey cry? More like who…the answer: Lady Gaga.

The singer got candid about her career, life and personal traumas while speaking onstage with the TV mogul at the first event for her WW 2020 Vision Tour in Fort Lauderdale on Saturday. A day later, Oprah posted on her Instagram a video of her getting tearful as she spoke with Gaga backstage after their appearance.

“Of course I would. That’s what happens when you’re in the presences of an angel,” replied Gaga, who got emotional herself.

“I was like, I couldn’t believe you were saying these things. And you were so vulnerable,” Oprah said, giving the singer another hug.

“You both let us in, though,” commented Oprah’s BFF and TV personality Gayle King.

“I was raped repeatedly when I was 19 years old, and I also developed PTSD as a result of being raped and also not processing that trauma,” she told Oprah.

The TV mogul told the singer backstage that she was moved by her presence and the way she held herself and spoke to the audience.

“And thank you so much for being a part of healing me and my life,” Gaga said.

“Let’s end the shame, honey,” Oprah replied. “That was just so good. That was powerful.”

“We took a big bite of bravery together,” Gaga said.

“Hey, we took a big bite of braver!” Oprah said, as the two hugged again. “We didn’t even take a little bite.”

“No, that was the whole meal,” Gaga said, before telling Oprah she loves her.

Oprah wrote on her Instagram, “#Oprahs2020VisionTour Fort Lauderdale, thank you for your warmth and fantastic generosity. And @ladygaga: Your willingness to ‘go there’ with your vulnerability opened all our hearts today. Watch our full interview this Wednesday 1/8 on @ww.now’s IGTV. #BigBiteOfBravery.”

Watch a Psychic Predict Ryan Seacrest’s Future As a Dad

Qasem Soleimani: Iraqi MPs back call to expel US troops

Iraqi MPs have passed a non-binding resolution calling for foreign troops to leave, after the US killed Iranian general Qasem