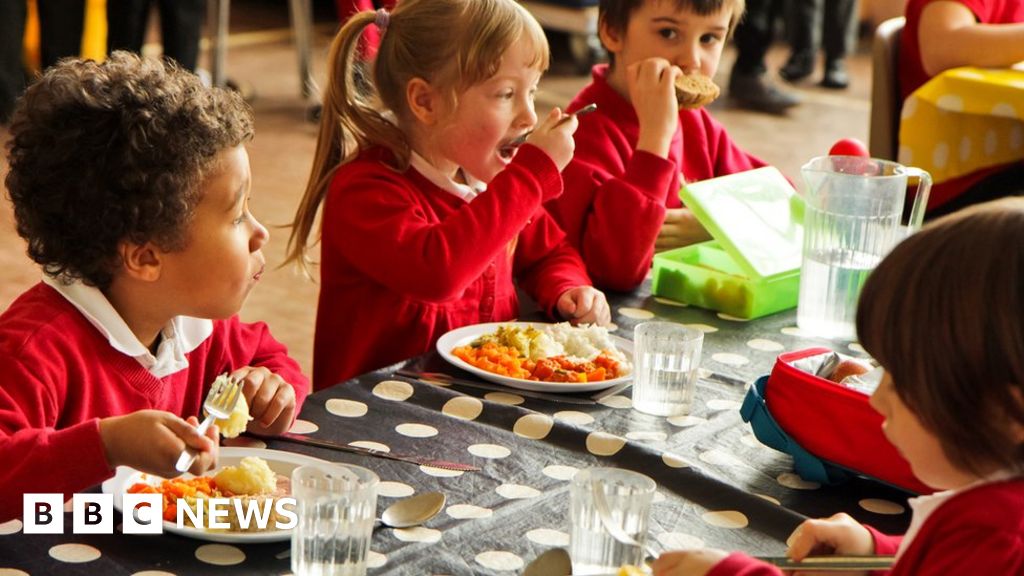 Free school meals should be extended to another 1.5 million children in England, says a government-commissioned review into food and healthy eating.

The National Food Strategy warns that the country’s eating habits are a “slow-motion disaster”.

The review warns of the toxic connection between poor diet and child poverty.

Report author Henry Dimbleby said a nutritious diet was the “foundation of equality of opportunity”.

“Unless action is taken to improve our food system, many thousands will continue to suffer,” said Mr Dimbleby, co-founder of the Leon food chain.

The negative impacts of growing up hungry are long-lasting and corrosive, says the review, which is claimed as the most significant for decades.

“One of the miserable legacies of Covid-19 is likely to be a dramatic increase in unemployment and poverty and therefore hunger,” says the food strategy report.

As an immediate intervention, the review calls for many more children to be eligible for a free meal at school, as “only 1% of packed lunches meet the nutritional standards of a school meal”.

The review says they should be available to a further 1.5 million children, in addition to the 1.3 million already eligible – so almost one in three children would get free meals.

The extension of free school meals, at a cost of £670m per year, would expand eligibility to all children in households where the parent or guardian is claiming universal credit or equivalent benefits.

Such a move would aim to stop pupils being hungry at school and prevent the negative consequences for learning and behaviour.

Footballer Marcus Rashford recently raised the profile of the importance of school meals during the summer holidays for families who are struggling financially, forcing a U-turn which will see vouchers continuing over the summer break.

The food strategy proposes making a long-term commitment to feeding more families over the summer holidays, by making another 1.1 million children in England eligible for the “holiday activity and food programme”, at a cost of £200m per year.

Paul Whiteman, leader of the Nation Association of Head Teachers, said there were already too many children who “arrive at school hungry and unable to learn”.

“Free school meals at least guarantee that children going hungry at home get one nutritious meal a day,” he said.

There are warnings about “wilfully misleading” packaging of unhealthy products and the report challenges the “false virtue” of how the food industry presents itself.

Behind the ethical ambitions, the report suggests there is still a culture of “unhealthy multi-buy offers”.

Mr Dimbleby spoke of some apparently healthy fruit snacks that are “clothed in a veneer of goodness and might not be better for you than a Mars bar”.

He gave Marks & Spencer’s Percy Pig sweets as an example, saying they are marketed on the packet as containing all natural fruit juice and placed “right by you kids’ little fingers”.

However, he said the first four ingredients listed are forms of sugar such as fructose syrup and glucose-fructose syrup.

Mr Dimbleby said he was singling out Marks & Spencer “not because it is the biggest sinner” but because it is a “well-trusted company” which pledges to “always strive to do the right thing”.

“If M&S – which is a great deal more scrupulous than many food companies – is guilty of such trickery, you can be sure the practice is ubiquitous,” he added.

He also criticised Innocent’s Juicy Water for boasting of “no added sugar”, while “omitting” to mention the eight teaspoons-worth of natural sugars from grapes and pears.

There are serious consequences, says the review, with one in seven deaths in the UK attributable to poor diets.

“A nutritionally poor-quality diet is the leading risk factor for ill-health in the UK, yet we do not treat it with the same seriousness afforded to other risk factors.

“That has to change,” said Susan Jebb, Oxford University professor of diet and population health, who worked on the report.

This is the first part of the review, with the second part next year expected to focus on environmental issues, such as climate change, pollution, sustainable farming and the spread of diseases.

Environment Secretary George Eustice said the food industry had “worked round the clock” to keep supplies going through the Covid-19 lockdown.

“But we know there is more to do and we will carefully consider this independent report and its recommendations as we emerge from the pandemic and build a stronger food system for the future,” said Mr Eustice.

Brexit: ‘Final throw of the dice’ as trade talks resume

Ryanair has reported a loss of €185 million for the first financial quarter of the year. The figure compares to