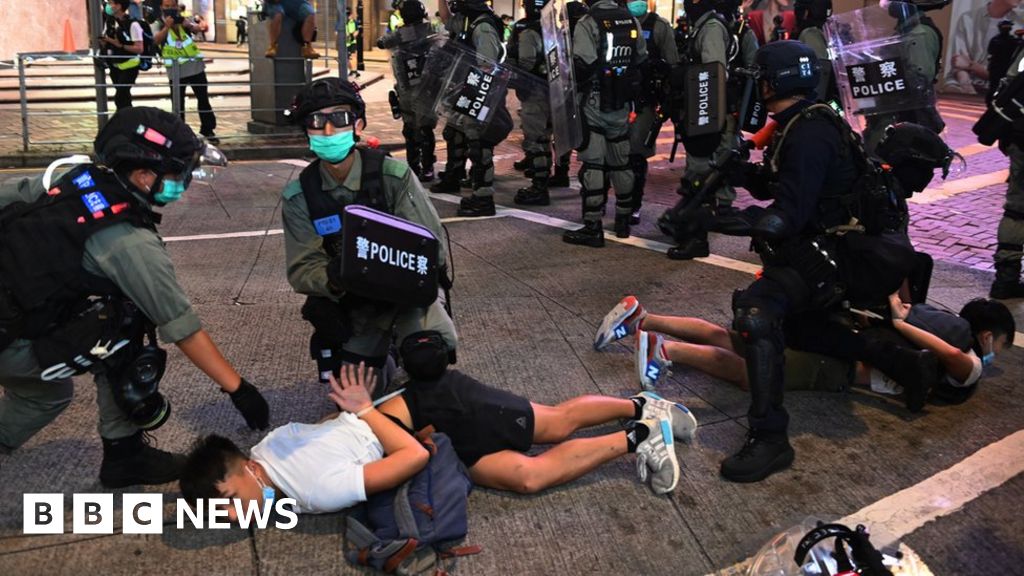 Foreign Secretary Dominic Raab is expected to suspend the UK’s extradition treaty with Hong Kong later amid rising tensions between London and Beijing.

It follows the controversial national security law imposed in the Chinese territory, and the decision to ban Huawei from the UK’s 5G network.

China has accused the UK of meddling in its own internal affairs.

Beijing has insisted it is committed to upholding international law and has accused the UK and the US of seeking to de-stabilise Hong Kong.

Mr Raab is due to make a statement to Parliament later on “our extradition arrangements and also a range of other measures that we might wish to take” in respect of the former British colony.

Such arrangements have been in place for more than 30 years.

What is the extradition treaty?

The existing agreement sets out the basis on which those suspected of committing crimes in Hong Kong can be apprehended if they are in the UK and returned to face trial subject to due legal process and approval by ministers.

But political and economic relations between the two nations have become strained in recent months, with the UK reversing its decision to give Chinese firm Huawei a central role in the UK’s 5G communications infrastructure.

The UK has denounced the new security law imposed in Hong Kong as “deeply troubling”, with the foreign secretary calling the move “a grave step”.

We’ve had the strongest indication so far from the foreign secretary that the UK is going to scrap its extradition treaty with Hong Kong in response to China’s actions there.

That’s a political decision designed to send another message to Beijing.

Sanctions – which could target senior Chinese officials – are an option too. But they are more complicated and likely to take longer.

At the same time, tensions with Russia are surfacing again over hacking and interference in the UK political system.

On Tuesday or Wednesday, we’ll finally see the Russia report, which is likely to examine a broad range of ways in which Russia is alleged to have sought to use influence, including the Brexit referendum and the 2014 Scottish independence referendum. Last week, ministers accused Russia of trying to hack the UK’s vaccine research.

All of this points to tensions escalating with both countries in the coming months, just at the time when the UK is trying to establish its place in the international system after Brexit.

The UK, US and EU have accused Beijing of undermining the “One Country, Two Systems” principle guaranteeing a high degree of autonomy for Hong Kong under Chinese rule since the 1997 handover of sovereignty.

They have said new security laws which came into force last month – making acts of subversion punishable by life sentences – breach the terms of the 1984 Joint Declaration protecting political and economic freedoms.

In response, the UK has offered the 350,000 Hong Kong residents who hold British Overseas National passports – and a further 2.6 million who are eligible for them – enhanced residency rights should they wish to come to the UK and a route to possible citizenship.

But China has warned that it will retaliate if the UK imposes sanctions on any of its leading officials in relation to human rights offences and allegations of police brutality in Hong Kong.

Speculation that the extradition arrangements could be suspended follows concerns expressed by senior judges in the UK about threats to the independence of the Hong Kong judicial system.

Lord Reed, president of the UK’s Supreme Court, has warned the practice of UK judges sitting on Hong Kong’s Court of Final Appeal is under threat and must “remain compatible with judicial independence and the rule of law”.

Proposals for an extradition treaty between Hong Kong and China provoked widespread protests last year amid concerns about political interference in the Chinese judicial system and the right to a fair trial.

‘Gross and egregious’ abuse against Uighurs

The UK has also stepped up its criticism of China’s human rights record, accusing Beijing of “gross and egregious” abuses against the Uighur population in Xinjiang province.

Mr Raab told the BBC that reports of forced sterilisation and wider persecution of the Muslim group were “reminiscent of something not seen for a long time”.

Labour has also called for sanctions on Chinese officials involved in the alleged abuse of Uighur Muslims.

Drone footage that has been widely circulated appears to show Uighurs being blindfolded and led to trains, and which has been authenticated by Australian security services.

Villa Copenhagen has officially opened its doors in the heart of Denmark’s capital city. Housed in the century-old Danish Post