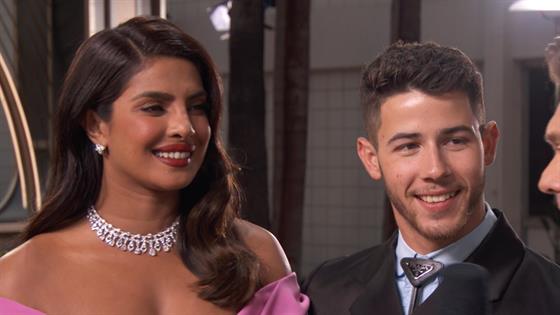 These two are feeling so cool, cool, cool in the romance department!

More than a year after saying “I Do” in not one but two fabulous weddings, Nick Jonas and Priyanka Chopra appear stronger than ever.

And just when fans thought they knew more than enough about this couple, Priyanka chose to drop a small but oh so sweet story about her relationship with the Jonas Brothers member.

“The first thing I do in the morning is put on music. My life has always been pretty musical, and now with Nick it’s completely musical,” she told Harper’s Bazaar this week. “I decided to date him after seeing the video for ‘Close,’ where his shirt comes off. So that song is my favorite.”

It’s a small piece of insight into a Hollywood couple who continues to captivate pop culture followers ever since they first sparked romance rumors at the 2017 Met Gala.

In fact, we decided to take a trip down memory lane and look back on some of the pair’s biggest moments as a couple.

Enjoy Nick and Priyanka’s romance rewind in our gallery below.

Nick Jonas and Priyanka Chopra first sparked rumors of a romance back at the 2017 Met Gala, where they walked the red carpet together.

Between attending a Los Angeles Dodgers baseball game and the Beauty and the Beast Live in Concert show together, this pair inadvertently confirmed their romance with all their public outings.

In July 2018, Nick proposed to Priyanka after two months of dating. In fact, the “Jealous” singer shut down the Tiffany & Co. store in London to check out diamond engagement rings just weeks before.

The famous newlyweds, who tied the knot in two ceremonies in India, kept the celebrations going with a glamorous reception at the Taj Palace Hotel in New Delhi, India.

While celebrating their wedding reception in Mumbai, India, the Bollywood actress and Nick posed for beautiful photos.

When the Jonas Brothers reunited and took part in the Happiness Begins tour, Priyanka was one of the band’s biggest supporters. In fact, she was spotted dancing and singing at multiple shows.

While celebrating the 2019 Oscars, Nick and Priyanka stepped out for the Vanity Fair Oscars after party—the same event where they first met in 2017. “I put my drink down,” Nick recalled to Vogue when spotting his wife on that special night. “Get on one knee—this is in front of a bunch of people—and I say, ‘You’re real. Where have you been all my life?’ Like, loud.”

In 2017, the famous pair attended the larger-than-life Met Gala with Ralph Lauren. Fast-forward to 2019 and the pair attended as newlyweds!

When celebrating Christmas as husband and wife, the couple incorporated traditions from both of their families.

This award season, pop culture fans are keeping their eyes open for this Hollywood couple who never disappoint in the fashion department.

Medical News Today: What to know about oscillopsia

Oscillopsia is the sensation that the surrounding environment is constantly in motion when it is, in fact, stationary.Oscillopsia is usually