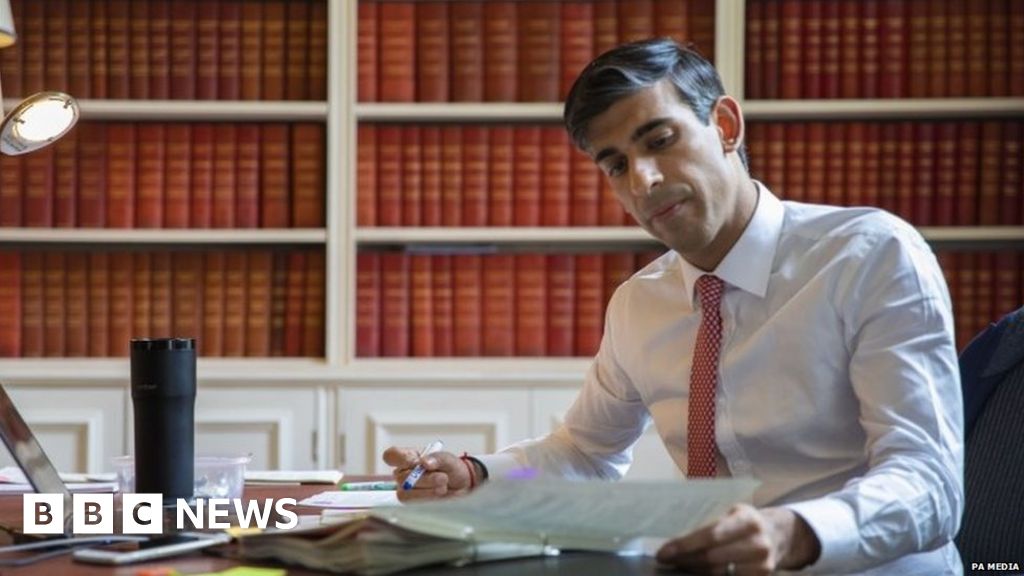 The fund will subsidise six-month work placements for people on Universal Credit aged between 16 and 24, who are at risk of long-term unemployment.

Labour welcomed the move, but said the government had failed to “rise to the scale of the unemployment crisis”.

This would exempt the first £500,000 of all property sales from the tax.

BBC Newsnight’s political editor Nicholas Watt said the chancellor may also introduce a temporary VAT cut to help the hospitality sector, which has been hit hard in the pandemic.

It will include the jobs pledge alongside a £3bn “green” fund and boosts for apprenticeships.

In the wake of the prime minister’s “new deal” to build after the coronavirus outbreak unveiled last week, Mr Sunak promised he would deliver the economic update to tackle increasing fears of mass unemployment, particularly among young people.

The Treasury said the “kickstart scheme” would be part of a “three-point plan for jobs… to help Britain bounce back from coronavirus”.

Hundreds of thousands of “new, high-quality” subsidised jobs will be created, the government said.

The CBI praised the scheme as “a much-needed down payment in young people’s futures” and unions said it was “a good first step”.

The chancellor has already outlined a number of other measures in the build-up to his statement, including:

Employers will be able to top up that payment if they wish.

The government said it would allow young people “the opportunity to build their skills in the workplace, and to gain experience that will improve their chances of going on to find long-term sustainable work”.

The scheme will open for applications in August, with the first jobs expected to start in the autumn, and run until December 2021 – with the option of being extended.

It will cover England, Scotland and Wales, and the government said it would provide additional funding to Northern Ireland for a similar scheme.

But Scotland, Wales and Northern Ireland are also calling for fiscal rules to be relaxed to allow them to borrow more and spend unused capital funding to address the “monumental challenges” of the economy.

The government is looking now to the second phase of the crisis, when the worst stage of the health aspect has passed and they hope the economic recovery can begin.

But job losses have begun, with barely a day going by without an announcement from a household name they are shedding staff.

The reality is many of those who have been paid by the Treasury will find their job doesn’t return.

The focus of the chancellor’s statement, therefore, will be “jobs, jobs, jobs”, insiders say.

There will certainly be a long list of proposals from the Treasury.

It’s not a small matter to do something like cut stamp duty, cut VAT in some sectors, accelerate infrastructure spending, or provide £2bn to subsidise jobs for young people.

But they are certainly much more orthodox actions than the kind of drastic steps the Treasury took at the start of this crisis.

The chancellor has previously acknowledged young people could be the worst-affected by the crisis when it comes to employment, as they are the age group most likely to be on the government’s furlough scheme – which is set to end in October.

Already, between the start of lockdown in March and May, the number of people aged 24 and under claiming Universal Credit rose by 250,000 to almost 500,000.

In the Commons on Wednesday, Mr Sunak is expected to say: “Young people bear the brunt of most economic crises, but they are at particular risk this time because they work in the sectors disproportionately hit by the pandemic.

“We also know that youth unemployment has a long-term impact on jobs and wages and we don’t want to see that happen to this generation.

“So we’ve got a bold plan to protect, support and create jobs – a plan for jobs.”

Labour’s shadow chancellor, Anneliese Dodds, said the scheme “should help many young people to access work” but said the government had not yet done enough to address the threat of mass unemployment.

She called on it to extend the furlough and self-employed schemes, and create “tailored support” for older people or those living in hard-hit areas.

The director-general of the CBI, Dame Carolyn Fairbairn, said the announcement could see the government “lessening the potential scarring impact of the pandemic for the next generation”.

But she said businesses and the government needed to “work to deliver the kickstarter scheme simply and at speed”, adding: “There can be no time lost in preparing young people who are entering one of the toughest jobs markets we’ve seen in decades.”

Frances O’Grady, general secretary of the Trades Union Congress, welcomed the support for young people but said unions would be “checking the small print to ensure every job provides proper training and a bridge to steady employment”.

The national chairman of the Federation of Small Businesses, Mike Cherry, said a focus on jobs was “absolutely essential to lift the country out of the economic hardship caused by the Covid crisis”.

But he appealed to the government to ensure smaller firms could benefit from the scheme, adding: “Small businesses must not be left waiting in line behind big corporates when they could get people to work now.”

One of my happiest memories is from a vacation in Italy a few years ago. I spent two weeks traveling