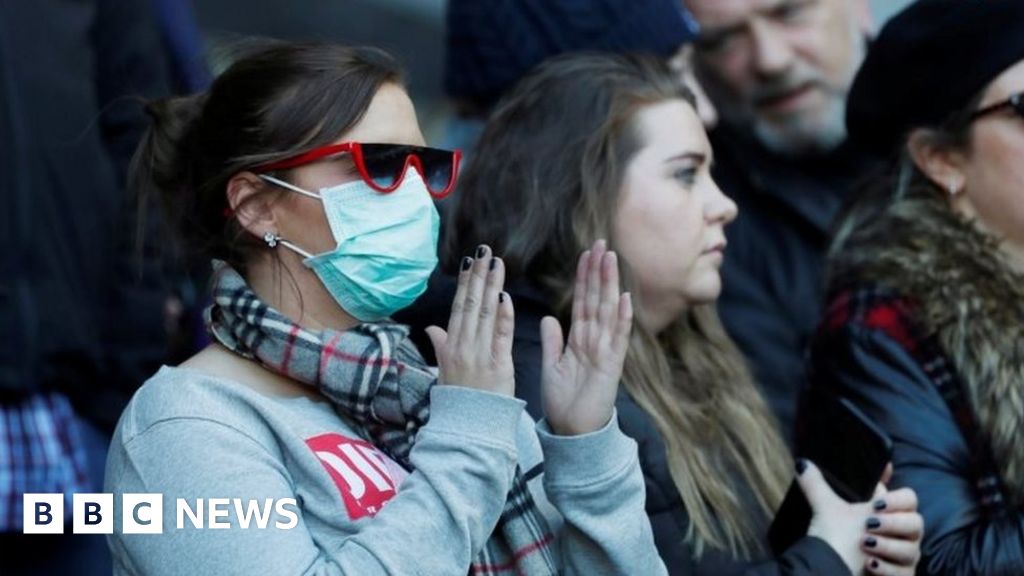 The Prime Minister will chair an emergency Cobra meeting later to decide whether to bring in measures to delay the spread of coronavirus in the UK.

The meeting is expected to consider whether “social distancing” measures should now be introduced .

These could include banning of big events, closing schools and encouraging home working.

It comes after a man in his 60s became the UK’s third death linked to the Covid-19 virus.

Ministers will also meet with sports bodies and UK supermarkets to discuss their response to the outbreak.

On Sunday, the number of confirmed cases in the UK rose to 278, from 209 on Saturday – the biggest rise so far.

The UK is currently in the first phase – “containment” – of the government’s four-part plan to tackle the spread of coronavirus.

The meeting is expected to consider whether the UK should officially move into the “delay” phase, which could mean the introduction of “social distancing”.

Such a step would require agreement from chief medical officer Professor Chris Whitty and chief scientific adviser Sir Patrick Vallance, who are due to be at the meeting.

The government has previously said such action could include banning of sporting and other events where large numbers of people gather, and encouraging people to work from home rather than use crowded trains and buses.

Meanwhile sports governing bodies will meet with ministers to discuss the possibility of staging events behind closed doors.

Environment Secretary George Eustice will also discuss contingency plans with supermarket chief executives, including proposals on how to support vulnerable groups who may have to self-isolate.

The latest person to die – a man in his 60s with “significant” underlying health problems – had recently returned from Italy, Public Health England said on Sunday.

The man was being at specialist infectious diseases unit in North Manchester General Hospital after testing positive for coronavirus.

Prof Whitty said health officials were tracing people who may have been in contact with the man while he was carrying the virus.

The Foreign Office has warned Britons to avoid large parts of northern Italy under a coronavirus quarantine, unless their journey is essential.

Those travelling from locked-down areas have also been advised to self-isolate if they returned to the UK in the last 14 days – even if they have shown no symptoms.

Italy now has the highest number of confirmed cases outside China at 7,375, and its death toll rose from 133 on Sunday to 366.

British nationals are still able to depart Italy without restriction, but some airlines have cancelled flights from affected areas.

Amid concerns that fake news about the coronavirus is causing confusion, a specialist unit to combat disinformation has been set up.

Teams from across Whitehall have been brought together to identify and respond to disinformation in a bid to limit its spread.

He said a new online coronavirus service has been used by more than one million people since its launch last week.

Prof Powis said the service should be the “first point of access” and was capable of determining whether the user should have a virus test.

As of Sunday, 23,513 people had been tested across the UK, with 273 cases proving positive for the virus.

And on Sunday evening, five more cases in Northern Ireland were announced, bringing the total in the country to 12 and 278 in the UK.

In Wales two more people have tested positive for the coronavirus, taking the total number there to four.

Chancellor Rishi Sunak pledged to give the NHS “whatever resources it needs” to cope with a coronavirus epidemic, ahead of Wednesday’s Budget.

Mr Sunak also said he was looking at temporary measures to support people who may be unable to go to work or businesses which may suffer as a result of the measures.

The government outlined emergency legislation to tackle coronavirus over the weekend, including measures to allow people to leave their jobs and volunteer to care for those affected.

Have you or anyone else you know been affected by the coronavirus? You can tell us your story by emailing haveyoursay@bbc.co.uk.

Following a decline in demand caused by the coronavirus, Lufthansa Group will reduce capacity by up to 25 per cent.