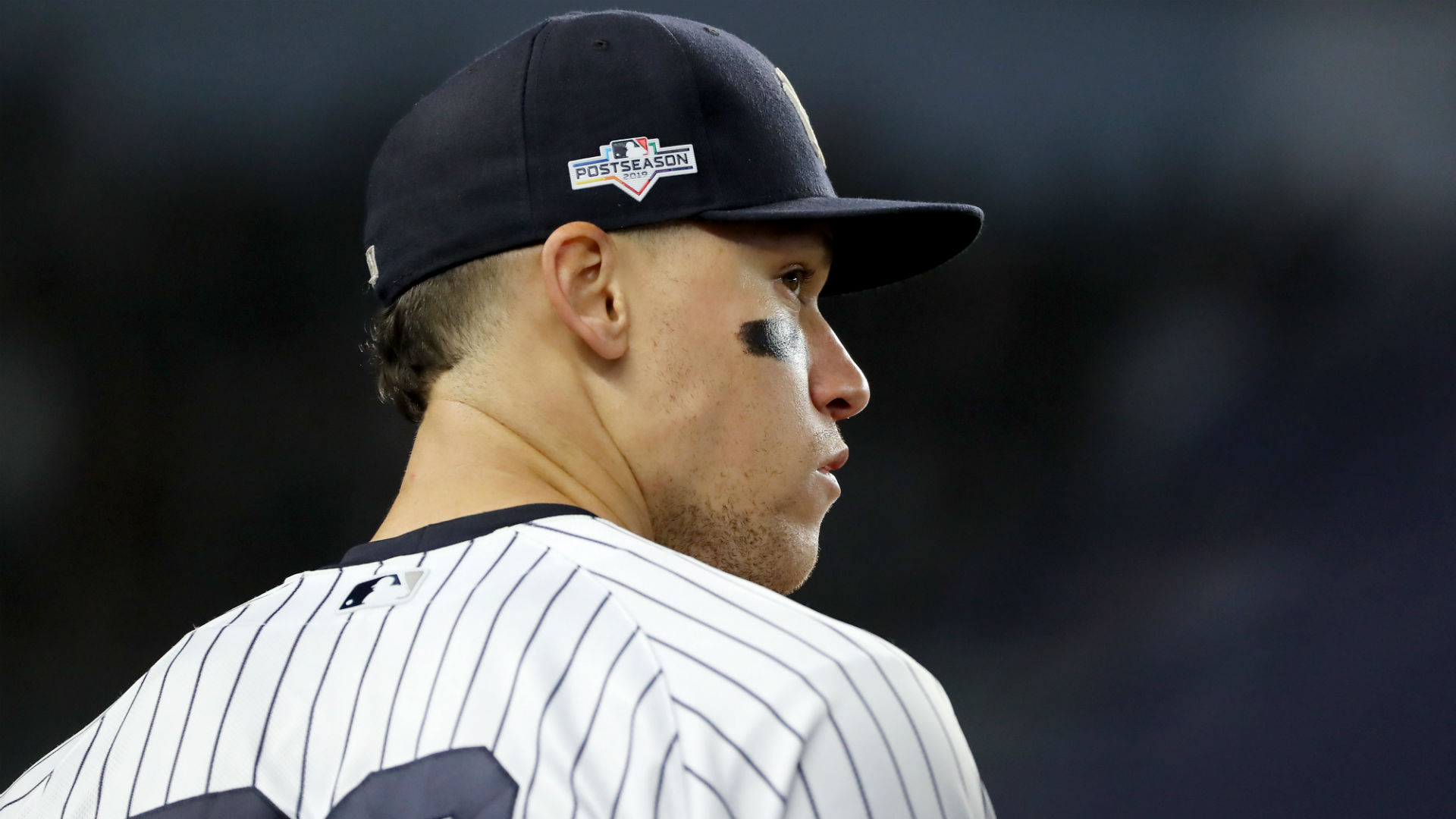 The Yankees looked like a team that flirted with destiny all season. No injury could hold them down en route to an 103-win season. They navigated through up-and-down seasons from key members of their starting rotation. Now, the chase for No. 28 is postponed until 2020, after Jose Altuve broke the hearts of Yankees fans everywhere with a series-winning bomb off Aroldis Chapman.

BERNSTEIN: Astros are everything Yankees, Dodgers wish they were

No, the starting pitching wasn’t the problem in the postseason, but it was part of a problem.

Yes, Astros hitters weren’t particularly good in the ALCS, slashing .178/.275/.302 vs. New York pitching entering Game 6, but playing a bullpen game, with a fatigued and worn bullpen in an elimination game, would starting pitching — stick with me here — actually help the Yankees?

The Yankees actually pitched pretty well in the series. But here’s the thing: Yankees starters in the postseason pitched on average 4 2/3 innings per start. While the Yankees’ bullpen is undoubtedly a strength, luxury and weapon that other teams don’t have, in critical situations where any one matchup, pitch or at-bat might be crucial, the regular season numbers don’t mean as much.

Prior to Game 3, Astros manager A.J. Hinch alluded to the fact that relief pitching can only become more vulnerable as games go on; some of that is because of fatiguing relievers, but another factor might be more familiarity with a reliever’s plan of attack. Perhaps that’s why the Astros held the Yankees to four runs in the deciding game Game 6, relying strictly on relievers who the Yankees didn’t see often throughout the series.

If the Yankees decide to fortify their rotation, there are options on the market. The Yankees have been linked to Gerrit Cole in the past, seemingly interested in trading for him twice before, but ultimately Cole went to the Astros, where he victimized the Yankees this postseason. Houston didn’t even need to send him out twice, because the ‘Stros relied on Justin Verlander and Zack Greinke in four games between the two. That right there is the benefit of great starting pitching.

It might be a clash of philosophies, and the numbers might bear out a different story in favor of bullpen use in the postseason, but common sense does not. Full disclosure: I love the numbers. I love the way we evaluate pitching in today’s game — but in the pressure cooker environment of October, when every matchup and pitch could swing things one way or the other, maybe relying on your horses to get you through a lineup is the best way to go.

Maybe the trio of Luis Severino, James Paxton and Masahiro Tanaka doesn’t measure up to Justin Verlander, Gerrit Cole and Zack Greinke, but if you’re the Yankees, why would you waste another upcoming season of what-ifs and maybes when there’s going to be a surefire, bona fide ace on the market? More starting pitching help could potentially be available, should Stephen Strasburg opt out of his contract with the Nationals or Zack Wheeler turn down the qualifying offer from the Mets.

While bullpens might be a continuing trend in baseball, the Yankees cannot continue to try to get cute via trade when there are options staring them in the face. It would be silly, to say the least.

D.J. LeMahieu’s contract is up after the 2020 season, but we’ve seen how vital he is to this Yankees team. Contact baseball is the new market inefficiency — crazy how that works, right? — and the Yankees’ strikeout rate wasn’t horrible, but it was at 23 percent, 11th in MLB. The two teams that will be vying for the World Series this year, the Astros and Nationals, ranked first and fifth, respectively.

During an injury-riddled season for the Yankees, LeMahieu was among the best in almost every facet. He hit for power, he fielded multiple positions well, he drove in runs and, obviously, didn’t strike out much. Not to mention, LeMahieu avoided the injured list in 2019. Best ability is availability, and so forth.

LeMahieu’s K rate in 2019 was dazzling. At 13.7 percent, it was by far the lowest of the Yankees and among the best in baseball. For a team that leans on power and is not afraid to swing and miss, the Yankees need not only to extend LeMahieu, but find a way to clone him. His skillset as a hitter is vital and diversifies the Yankees’ lineup a lot, and even with one more season under contract, it only makes sense to get him to avoid the open market.

Is Giancarlo Stanton destined to play left field in the Bronx for the next five years? Probably not.

If that was the plan, the Yankees likely wouldn’t have brought back Brett Gardner on a one-year deal and absolutely refused to trade Clint Frazier for anybody. With Mike Tauchman a surprising ingredient to the outfield recipe in 2019, there are a few options for the Yankees to figure out.

Stanton’s injury history is problematic and concerning, and there are some doubts as to whether he can last a full season in left field. With lingering hamstring issues in 2018 and multiple leg injuries in 2019, it’s hard to envision a world where Stanton plays 140 to 150 games in the outfield in 2020.

Would the Yankees consider looking in-house to solve the issue? Frazier showed flashes at the plate in 2019 and could be given the keys to that spot should he remain on the roster past the offseason. Tauchman went from unknown to Bronx savage before an injury sidelined him the rest of the season. Could Gardner be brought back for one last go? What about Cameron Maybin, who went from another fill-in to impact player?

Stanton’s long-term future is as a DH, which means, for now, the Yankees need to figure out how they’re filling that left-field spot.

4. Figure out the third base logjam

It’s not quite the Pan/Pam dilemma from “Step Brothers,” but it could be just as confusing, considering there is a D involved in there somewhere.

Gio Urshela had a massive year for the Yankees, living up to the top-prospect billing he once had with the Indians with 3.1 fWAR, by far his best year as a major leaguer. There’s a catch: With Miguel Andujar likely returning from injury, there’s a tough decision for Yankees brass to make at the hot corner.

Andujar had a very good bat in his rookie season, but here’s where the D gets involved: Andujar’s defensive deficiencies plagued his overall production, costing him two wins of production, per Baseball Reference (-2.2 dWAR). Along with his 27 home runs, he had -25 DRS on the season, the worst among third basemen in all of baseball and the second worst mark among all positions.

Urshela is strictly a third baseman, as is Andujar, so the idea of one of them being a backup infielder is tough to fathom in 2020. Could Andujar be dangled for pitching help? Tough to say, considering no one knows what he will be as he returns from the labrum tear.

The third base situation will come down to how much the Yankees value defense at the position. With contact baseball (remember that?) becoming more prevalent once again, defense in the infield matters.

Didi Gregorius is one of the few left-handed bats available to start for the Yankees. In 2019, there were only two big-time lefties in the lineup in Gregorius and Brett Gardner. Both are free agents following the season, and neither is a lock to return. The other lefties on the roster: Tyler Wade, Mike Tauchman, Greg Bird.

If the Yankees trust Gleyber Torres in the shortstop hole, then their major league infield left to right could be: Miguel Andujar, Gleyber Torres, DJ LeMahieu, Luke Voit/Edwin Encarnacion. You sacrifice a bit of defense in that scenario, but it’s still a very good offensive infield.

Gregorious has been a solid Yankee and was worth 14.6 fWAR/13.3 bWAR between 2015 and 2018 before dealing with injuries in 2019. The Yankees are going to have to decide how much they value defense, lefty power and leadership in that spot. It’s critical, and if I had to take a guess, I’d say a deal for Didi gets done.

Medical News Today: Everything you need to know about essential oils

Essential oils are concentrated extracts of various plants. Practitioners use them in natural and alternative health practices, such as aromatherapy