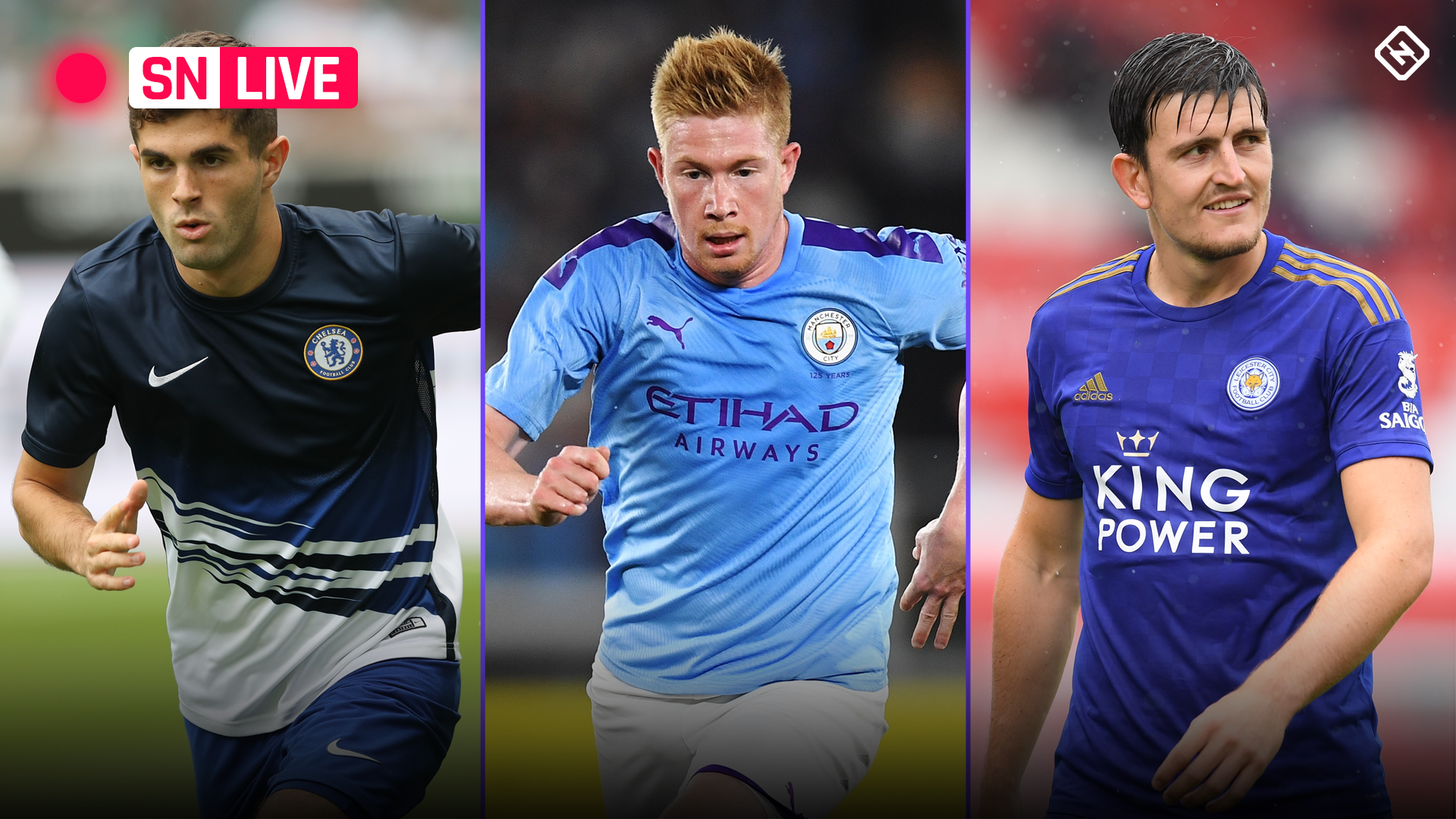 The wait is finally over. The 2019-20 English Premier League season has arrived, and the opening weekend will see 10 matches, including last year’s EPL and Champions League winners.

On Friday, 2018-19 Premier League runners-up and 2018 Champions League winners Liverpool opened their season in emphatic fashion with a 4-1 victory over Norwich City.

Two-time defending EPL champion Manchester City then followed with a 5-0 victory over West Ham on Saturday, a day that features six matches.

Day 1 also featured a nil-nil draw between Everton and Crystal Palace. Sheffield United returned to EPL play for the first time since the 2006-07 season to draw 1-1 with Bournemouth. Burnley and Southampton squared off with Burnley running away with a 3-0 win. And Brighton, spared relegation last season by just two points, topped Watford 3-0.

Finally, Tottenham’s Harry Kane made his case with brace in Spurs’ 3-1 victory over Aston Villa.

Sporting News is tracking live scoring updates and highlights from every match as the Premier League kicks off its 2019-20 season. Follow all the EPL action below.

12:53 p.m.: GOAL. MARTIAL! Against the run of play, and with better position on his defender, he slots home Andreas Pereira’s cross.

12:46 p.m.: He’s in. Christian Pulisic was just subbed in for his EPL debut for Ross Barkely.

11:46 a.m.: PENALTY TO THE REDS. Marcus Rashford is dragged down in the box and he goes on to convert! 1-0 to Manchester United.

10:49 a.m.: American sensation Christian Pulisic starts on the bench for the Blues.

10:16 a.m: GOAL! ARSENAL. Aubameyang with time and space and in front of a messy Newcastle defense!

9:48 a.m.: Halftime. Nothing to separate these two sides.

9:18 a.m.: Miguel Almiron, Newcastle’s new signing from MLS side Atlanta United, gets a yellow card for diving in the box.

10:07 a.m.: GOAL. WOLVES! They’ve been on the front foot since the half started. Of a corner, Leicester can’t get it clear and Leander Dendoncker gets two bites at it.

9:47 a.m.: Halftime. Zeroes across the board. No real advantage for either side.

9:23 a.m.: Leicester is obviously the more dominant side, with 74% of the possession and four shots to Wolves’ one.

2:16 p.m.: HARRY KANE WITH HIS BRACE. Eighteen yards out, he wasn’t going to miss from there!

2:12 p.m.: GOAL. HARRY KANE. The ball ricochets and falls favorably for the Spurs striker and he beats two defenders to put Tottenham up 2-1.

1:59 p.m.: GOAL. Spurs! Toby Alderweireld’s shot is saved off the line, Lucas Moura lays it off to Tanguy Ndombele who BLASTS IT FROM OUTSIDE.

11:35 a.m.: BURNLEY HAS MADE IT 3-NIL. Johann Gudmundsson gets in on the action with a little VAR help and Southampton are surely in trouble now.

11:27 a.m.: GOAL. BURNLEY. Ashley Barnes with a right footed shot with an assist from Erik Peters!

11:45 a.m.: GOAL! SHEFFIELD UNITED’S FIRST GOAL BACK IN THE PREMIER LEAGUE! Billy Sharp with the tap in after some bobbling around in the box!

11:19 a.m.: GOAL. BOURNEMOUTH! THREE QUICK SHOTS. First, Nathan Ake hops on his bike and is denied! Then Callum Wilson with a follow up shot is also denied. AND THEN IT’S CHRIS MEPHAM WHO HAMMERS HOME THAT REBOUND! 1-0 Bournemouth!

10:21 a.m.: Zeroes across the board. Sheffield United has out fouled Bournemouth 6-1, which can’t be good …

11:37 a.m.: RED CARD. Everton’s Morgan Schneiderlin sees his second yellow and the Toffees are down to 10 men!

11:11 a.m.: OFF THE LINE! Patrick van Aanholt denies Everton with a goaline clearance to stay in this one.

9:22 a.m. And that’s a wrap for the opening match of Saturday, with Manchester City dominating the second half to beat West Ham 5-0.

9:18 a.m.: GOAL! Sterling gets his hat trick. Mahrez hits Sterling’s run in perfect stride, and Sterling is able to slide the ball past Fabianski once again. Man City 5, West Ham 0.

9:12 a.m.: GOAL! Sergio Aguero scores on a penalty kick, leaving no doubt after his first attempt was saved. Aguero was awareded a retake after it was ruled that Declan Rice encroached into the box. Man City 4, West Ham 0.

Sergio Aguero misses the initial penalty kick, but Declan Rice’s encroachment forces a re-kick and he slots it home.

8:42 a.m.: Goal … then no goal! Sterling set up Jesus, who was wide open in the box for a tap-in goal. But VAR determined Sterling was offside – the first time in Premier League history the use of VAR has overtuned a goal.

8:38 a.m.: GOAL! It didn’t take long for City to get on the board in the second half. Kevin De Bruyne took on the West Ham defense straight on with a run down the middle, then passed to Raheem Sterling, who was ready on the left side for the cool, calm finish in the 51st minute. Man City 2, West Ham 0.

8:32 a.m.: The second half is underway. West Ham has made a change, bringing in Pablo Fornals for Michail Antonio. Man City hasn’t been at their best but still have the one-goal lead. Will they be able to break things open in the second half?

8:16 a.m.: And we’ve reached halftime. The latter stages of the half went through some quiet moments. West Ham managed only one shot on target during the first half, but they’re only a goal down.

7:55: a.m.: Our first goal of the day! Kyle Walker had a great run down the right side, and crossed the ball just before reaching the end line, and Gabriel Jesus put a brilliant finishing touch on the ball in traffic for Manchester City’s first goal of the season. Man City 1, West Ham 0.

7:42: a.m. Manchester City are starting to pick it up, but overall it’s been a slow start for the champs, who are still looking to find their form.

7:38 a.m.: Our first VAR of the day. West Ham was hoping for a penalty kick when Manuel Lanzini went to the ground after some contact, but it was correctly ruled that he was already off balance and falling. No penalty awarded.

7:31 a.m.: And we’re underway! Manchester City begins its defense of its Premier League title from last season. Will we see as many goal’s as Liverpool’s 4-1 rout of Norwich City on Friday?

7:15 a.m.: We’re almost set for the first match of Saturday. The lineups for West Ham vs. Manchester City are in.

Where do the Yankees go from here? Big decisions that New York must address this offseason