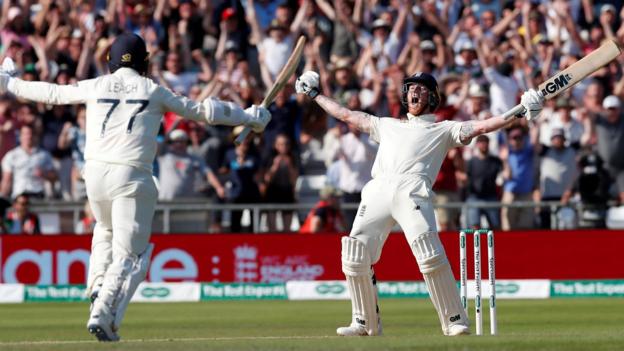 Ben Stokes’ astonishing 135 not out repeated his World Cup heroics and gave England one of their greatest victories to keep the Ashes series against Australia alive.

Just as he dragged England through the super over against New Zealand, Stokes played one of the most incredible Test innings by an Englishman to level the series at 1-1.

In the chase of an England record 359 at a delirious Headingley, the home side still needed 73 when Stokes was joined by last man Jack Leach.

Like he did in his innings six weeks ago to the day at Lord’s, Stokes launched a stunning solo assault.

He planted off-spinner Nathan Lyon for three sixes and followed that up by hitting Josh Hazlewood for four, six and six in three consecutive balls, during which point he passed 100.

With 17 needed to win, Stokes was dropped by a diving Marcus Harris. From the next over, Leach should have been run out, only for Lyon to fumble the ball and, from the very next delivery, Stokes could have been lbw, but Australia were out of reviews.

In the next over, Leach scrambled a single off Pat Cummins and, with one to win, Stokes hammered through the covers and sank to his knees in exhausted celebration.

It means the series is level with two matches to play, with the fourth Test at Old Trafford beginning on 4 September.

If the World Cup final was one of the most incredible games of cricket ever played, for the scale of its drama, tension and heart-stopping finish to be matched in the same summer is barely believable.

At the centre of both was Stokes, who added to his growing legend by single-handedly maintaining England’s hopes of regaining the urn.

Not only that, but he added yet another classic memory to a ground steeped in Ashes history by matching the exploits of Ian Botham in 1981.

An expectant Headingley was full before play began and, even though at one stage England lost five wickets for 41 runs, as long as there was Stokes, there was hope.

The noise gradually cranked up with every run added in his last-wicket partnership, the Western Terrace growing in celebration with each ball that Stokes dispatched into the crowd.

As the winning runs were scored, the noise released matched the magnitude of the achievement.

When Stokes summoned the energy to drag himself from the field, he paused and soaked up the adulation, once again as England’s magnificent match-winner.

From 156-3 overnight, England lost Joe Root with only two added to his overnight 75, only for Jonny Bairstow to arrive and take the fight to Australia.

As of Saturday evening, Stokes was almost shotless – he scored only three off his first 73 balls and was dropped by David Warner at slip off Lyon on 34 – but was swept along with Bairstow in a fifth-wicket stand of 86.

However, Bairstow was caught at second slip just after lunch, Jos Buttler was run out in a mix-up with Stokes, Jofra Archer heaved into the hands of deep mid-wicket and Stuart Broad was trapped lbw. The game looked gone.

That was to discount Stokes, who switched from careful defence to clean striking, his strokeplay made all the more brilliant by the knowledge that one mistake would have ended the match.

At the other end Leach stoutly survived the one or two deliveries he was trusted to defend at the end of each over – his contribution to the partnership of 76 was one not out from 17 balls.

Stokes, though, was in one-day mode – his last 84 runs came from 67 balls. He lofted Lyon down the ground and then into the crowd with an outrageous reverse-sweep.

He heaved the pace bowlers into the leg side, but also picked gaps in the deep-set field and ran hard.

There was the drama of Harris’ dropped catch at third man – almost identical to Simon Jones at Edgbaston in 2005 – Lyon’s fumble when Leach was well short of his ground and the leg-before decision that should have accounted for Stokes when there was only two to win.

But Stokes was not to be denied and one of the most memorable moments in English cricket history was served up in the baking sunshine.

When they were dismantled for 67 on Friday, England looked to have wasted a golden opportunity to level the series.

Instead, they became only the third team in Test history to be bowled out for less than 70 in their first innings and go on to win, as well as setting up a grandstand battle in the final two matches.

Australia’s premier batsman Steve Smith and England’s all-time leading wicket-taker James Anderson are set to return for the fourth Test, the latter on his home ground.

If that match, or the finale at The Oval, can follow the fluctuations of the first three Tests – remember, Smith’s brilliance won Australia the first and England were denied in the Lord’s dark in the second – then the 2019 Ashes will be spoken of in the same breath as the 2005 series.

England cannot afford to lose either of the final two Tests, otherwise Australia will retain the urn.

England certainly have issues to address, but when Stokes plays like he did at Headingley, anything seems possible.

Khloe Kardashian has no problem with Lamar Odom telling his truth.In this clip from Keeping Up With the Kardashians' upcoming