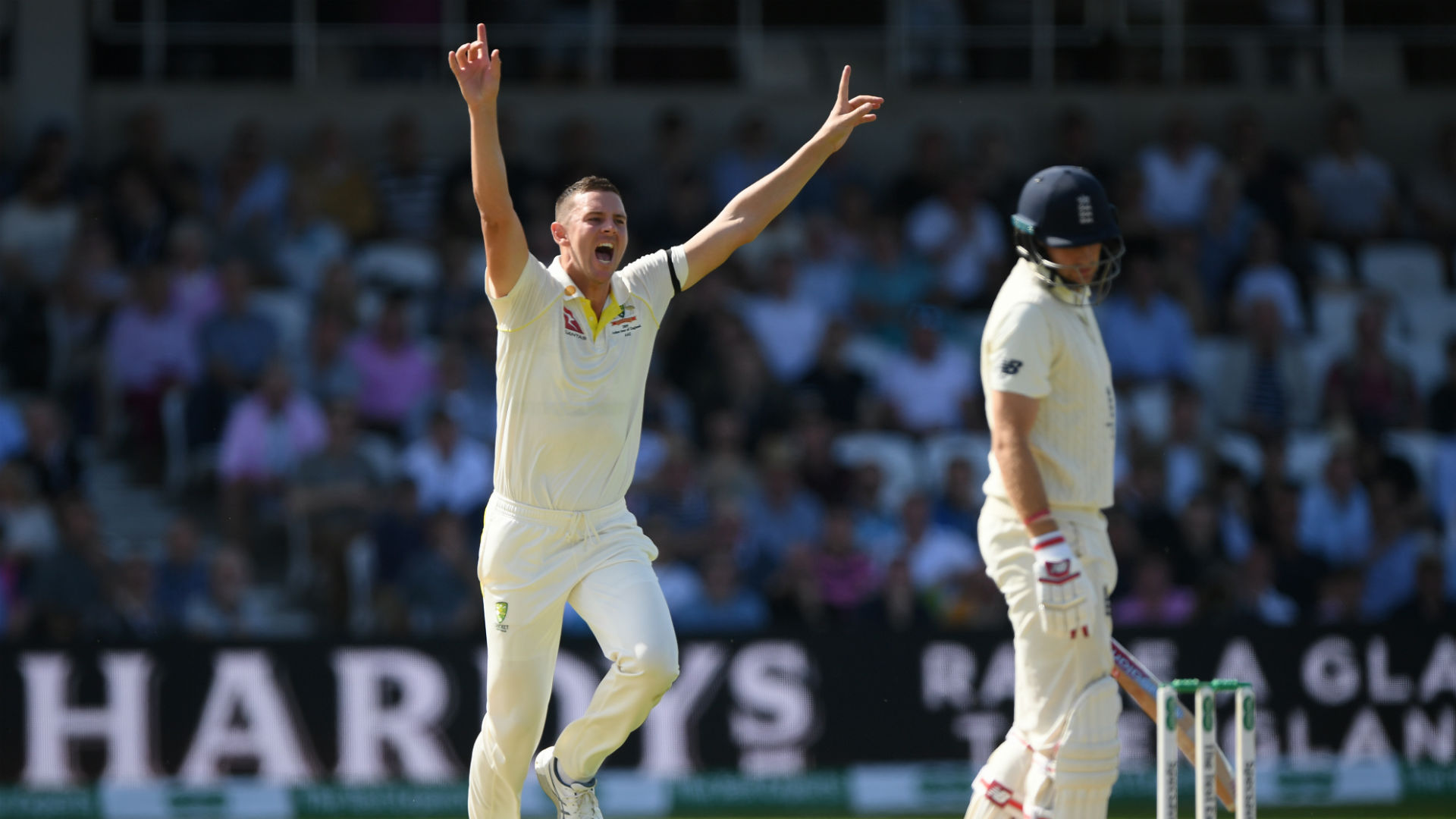 Josh Hazlewood claimed a five-wicket haul as Australia dismissed pitiful England out for 67 on a dramatic Day 2 at Headingley before building a big lead to stand on the brink of retaining the Ashes.

England appeared to take the upper hand when Jofra Archer took 6-45 to bowl Australia out for 179 on a rain-affected first day of the third Test.

That proved to be a false dawn as the tourists humiliated Joe Root’s side on Friday, rolling them over in only 27.5 overs in what were supposed to be batting friendly conditions on a warm day in Leeds.

Joe Denly (12) was the only batsman to make double figures in England’s lowest total at Headingley and its worst against its fierce rivals since 1948, Hazlewood (5-30) the pick of the bowlers with great support from Pat Cummins (3-23) and James Pattinson (2-9).

Australia was 171-6 at stumps – leading by 283 and looking certain to take a 2-0 lead – with Marcus Labuschagne (53) making a third consecutive half-century after being given three lives.

Earlier today England were bowled out for 67. pic.twitter.com/ZwnzGGUJO2

Hazlewood was on the money from the start, the under-pressure Jason Roy flashing loosely to David Warner for nine, who held on to another fine catch when Root nicked a peach of a delivery from the same bowler without scoring.

Rory Burns was snared down the leg side off Cummins and Ben Stokes was also taken by Warner chasing a wide delivery with a poor shot before Denly fell to Pattinson.

There was no let-up from Australia’s pacemen as Jonny Bairstow, Chris Woakes, Jos Buttler followed in quick succession.

Archer was caught behind off Cummins after leaving his bat dangling in the air before Hazlewood cleaned up Jack Leach to end a shambolic innings and secure his seventh five-wicket haul.

Stuart Broad (3-42) gave England hope when he trapped Warner leg before for a duck and Leach bowled Marcus Harris (19) through the gate with his first ball of the match, reducing Australia to 36-2.

Labuschagne was put down by Root at first slip off Stokes on 14, but Usman Khawaja fell to Chris Woakes and Stokes (2-33) bowled Travis Head (25) with a yorker as the wickets continued to tumble.

Stokes paid the price for overstepping when Labuschagne edged behind on 35 and Bairstow gave the right-hander another let-off by dropping him off England’s premier all-rounder on 42.

Broad removed Tim Paine, with Archer back on the field after limping off due to a cramp in his thigh, but Labuschagne brought up his half-century and was still there at the end of a painful day for England.

Hazlewood produced an outstanding exhibition of bowling with the new ball along with Cummins, capitalizing on England’s technical frailties and lack of application with the bat.

They probed relentlessly at a full length around the off stump, making the struggling England batsmen play and tempting them into some poor shots, with Pattinson also getting in on the act.

The trio were ruthless on what was their first time bowling together as a unit in a Test, with Warner taking four sharp catches in the slips.

Labuschagne had more than his share of luck but was rewarded for being prepared to hang in there.

While England was unable to knuckle down with the bat after starting the day in such a promising position, Labuschagne once again showed the determination to grasp a chance that may not have come had he not been called in as a concussion replacement for Steve Smith at Lord’s.

He added insult to injury for a weary England attack that created plenty of chances. Despite taking six second-innings wickets, it is facing another defeat.

MOMENT OF THE DAY

Hazlewood conjured up a brilliant delivery to send Root back to the pavilion on his home ground, Warner showing lightning quick reactions to take a superb catch at first slip.

– Only Smith (378) has scored more runs in this Ashes series for Australia than Labuschagne.
– Broad has now taken more Test wickets at Headingley than any other bowler; going clear of Fred Trueman (44). His dismissal of Warner was his 700th across all formats for England – a feat only James Anderson has accomplished previously.
– England has been all out for 85 or fewer on four occasions in Tests since the start of 2018.
– Warner’s four catches were the joint-most by a fielder in an Ashes Test innings.
– Root’s Test batting average as skipper is 40. He averaged 53 before he was named captain.

Chef Ben Returns to Below Deck Mediterranean, But Is Everybody Happy to See Him?